Bitcoin exchanges, rattled by the finance minister terming the cryptocurrency as not a legal tender, are planning to create a central repository of users that will help create and maintain a real-time record of transactions.

The purchase data of buyers and sellers of the virtual currency can then be traced through either the Aadhaar ID or the Permanent Account Number (PAN) of the user.

Details such as the total number of cryptocurrencies held, the value thereof, as well as the pattern of buying and selling by individual users, will be available through the central repository, according to a top industry member.

“This is one of the proposals we are planning to submit to the government committee which is looking into the issue of cryptocurrency,” said Ajeet Khurana who heads the Blockchain and Cryptocurrency Committee (BACC) of the Internet and Mobile Association of India. The committee has seven cryptocurrency exchanges as its members.

Khurana said the BACC aims to submit the proposal to the government committee, which is headed by Economic Affairs Secretary SC Garg, during the course of this week. In turn, the government panel is expected to submit its recommendations by March. The government is also expected to appoint a regulator to monitor trade in cryptocurrencies.

On February 1 while presenting the annual Budget to the Parliament, Finance Minister Arun Jaitley said the government will eliminate the use of crypto assets in financing illegitimate activities.

In the past, both the government and the central bank have cautioned citizens about trading in cryptocurrencies. 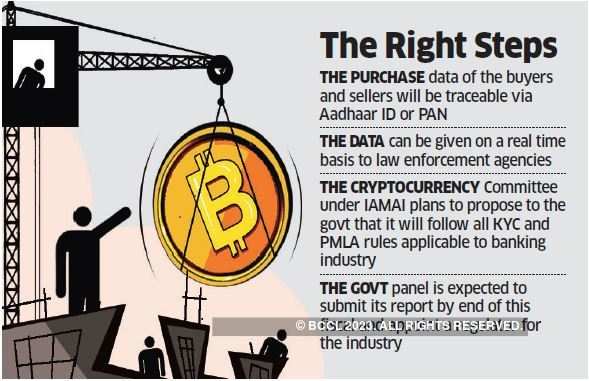 The Indian tax authorities have sent out an estimated 100,000 notices to investors asking them to reveal profits earned on cryptocurrency trading and to pay the applicable tax. Industry members estimate that in 2017, trade in bitcoins was worth about Rs 10,000 crore with around five million Indians actively trading in the cryptocurrency.

Currently, cryptocurrency exchanges require users to submit both PAN card and the Aadhaar number along with bank account details in order to create a trading account. The proceeds from all transactions are credited to the same account. However, as each exchange operates exclusively, this data is not shared.

“There was ‘panic selling’ for some time (after) FM Jaitley mentioned cryptocurrency (as illegal tender) in his Budget speech. But things have ‘stabilised’ thereafter,” said Nischint Sanghavi, head of bitcoin exchange Zebpay, which follows KYC (Know Your Customer) norms as well as the Anti-Money Laundering (AML) regulations stipulated for the banking sector.

“We are doing everything to have a self-regulated industry and once data pooling begins, verifying customer details will be faster,” he said.

The BACC is also planning a “code of conduct” for the industry. “These exchanges don’t deal with cash and will adopt the best practices applicable for the banking industry,” said Khurana.

Globally, countries like the US and South Korea are also trying to chart out a roadmap for trade in virtual currencies. Japan was one of the first to introduce regulatory oversight over cryptocurrencies, announcing a new set of regulations in April 2017.

“Though the government has specified that cryptocurrencies are not legal tender, we hope to present to the government committee that people can still trade in them like they do in ‘stock or gold’,” said Khurana.